On 20th June, the Edmund Rice U14 Rugby League team played against Holy Spirit College in the Tom Anderton Shield at the University of Wollongong. All the boys were pumped to play to try and win the shield. This was the first time the boys had come together this year and our goal was to not just throw the footy around and try to win, but to get our structure right for our next competition a week later.

We started the match strong, scoring a couple of tries. Being in front at half time, we came back and scored three more tries to finish the game 40-0. We were pleased to hold Holy Spirit to 0 but we knew we still had heaps more work to do.

The next tournament was in Bomaderry where we would play against St John’s High School and Corpus Christi in 15 minute halves. Our first game was early, so once we were ready in our Edmund Rice jerseys, we got straight to warming up for our first game against St John’s which we won 12-0. But we were still not pleased with our performance and knew what type of footy we wanted to play. It was Edmund Rice style of footy, which means we play hard and simple footy but, most importantly, we play with respect.

Our next game was against Corpus Christi and the only thing we were worried about was going out onto the field and playing Edmund Rice Footy. We knew that if we played as a team we would be unstoppable.

We finished the day with two wins and that meant we progressed to Albion Park. We started training every week to give ourselves the best chance of winning the next tournament.

On 4th August, we traveled to Albion park to compete against Kildare College Wagga Wagga, St Agnes High School and Red Bend College. The boys were extremely pumped to play our hardest to win the Cochrane Cup. After strapping on all our gear, we were ready to go! We knew the competition was going to be extremely hard. After a decent warm up and a few team runs, our captain led us onto the field to face off against Kildare College. The match started perfectly, with the team scoring quickly, but then Kildare College hit back. The half was coming to a close however ERC scored going into half-time. Our coach, Mr Sunderland, encouraged us to keep playing our style of footy. Coming out of half time Kildare College scored to put them in the lead but ERC scored again to win us the game

In the second game against St Agnes High School, we started off strong, scoring a few quick tries and finished with a score of 40-0.

We knew how hard the final game against Red Bend College was going to be. This would be the hardest game of the day and the year. The game started with an off-side penalty off the kick off, which meant ERC was on the attack. After scoring off the first set, the game was an arm wrestle for the rest of the half. On the stroke of half-time Red Bend gave away a penalty so we chose to kick the two in the huddle. At half-time Mr Sunderland told us to keep playing for each other and keep playing as a team. Coming out of half time we were back to an arm wrestle, then ERC scored, which put us up by 12 and we scored again making it 16-0. Red Bend also scored, however the final score was 16-4.

All the training and hard work paid off and the boys were now going to play at Campbelltown Stadium.

We were keen to proceed to the State Grand Final. This is where we would come up against All Saints, Maitland and was going to be our biggest game yet. We had trained in all weather conditions for this game and by the last training session we knew that we were ready. On the day of the game we all arrived at school already pumped up and were speechless that we had made it this far.

We were lucky enough to have a support crew of 50 students come and cheer us on. After a good warm up we listened to some final words of instructions from Mr Sunderland and our Principal Mr Gough.

We started the game strong, scoring a quick try and leading by 16-0 at half-time. Our coach and principal encouraged us to keep playing hard and simple. Coming back at half time, All Saints scored two tries, then the ERC picked up where we left off and closed the game off at 28-10.

It was great to get the win after all our training and hard work. The support crew definitely helped!

Now we progress to the Champions of Champions against the winner of the Buckley Shield. 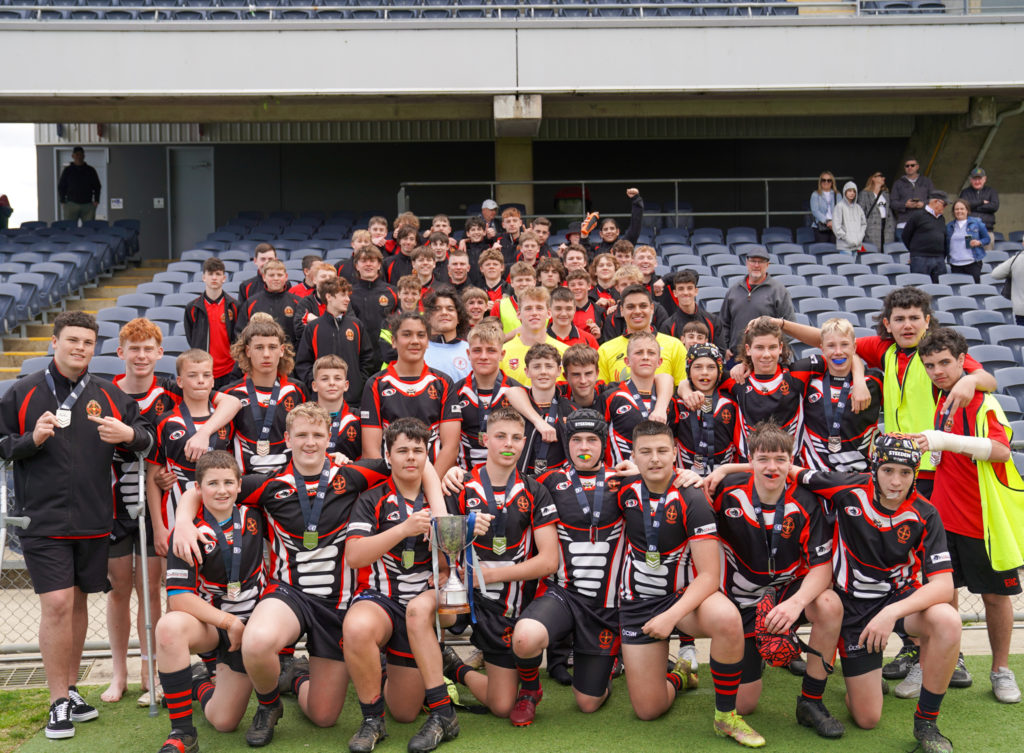