“We write to taste life twice, in the moment and in retrospect.”

English teachers have been pulling out all the stops to devise engaging activities for students that, ideally, get them up and away from their screens occasionally and the results have been impressive!

Students in Mrs Guest’s Year 7 class found inspiration in the view from a window in their house to develop some fabulous creative writing and to help them share their experiences with each other. 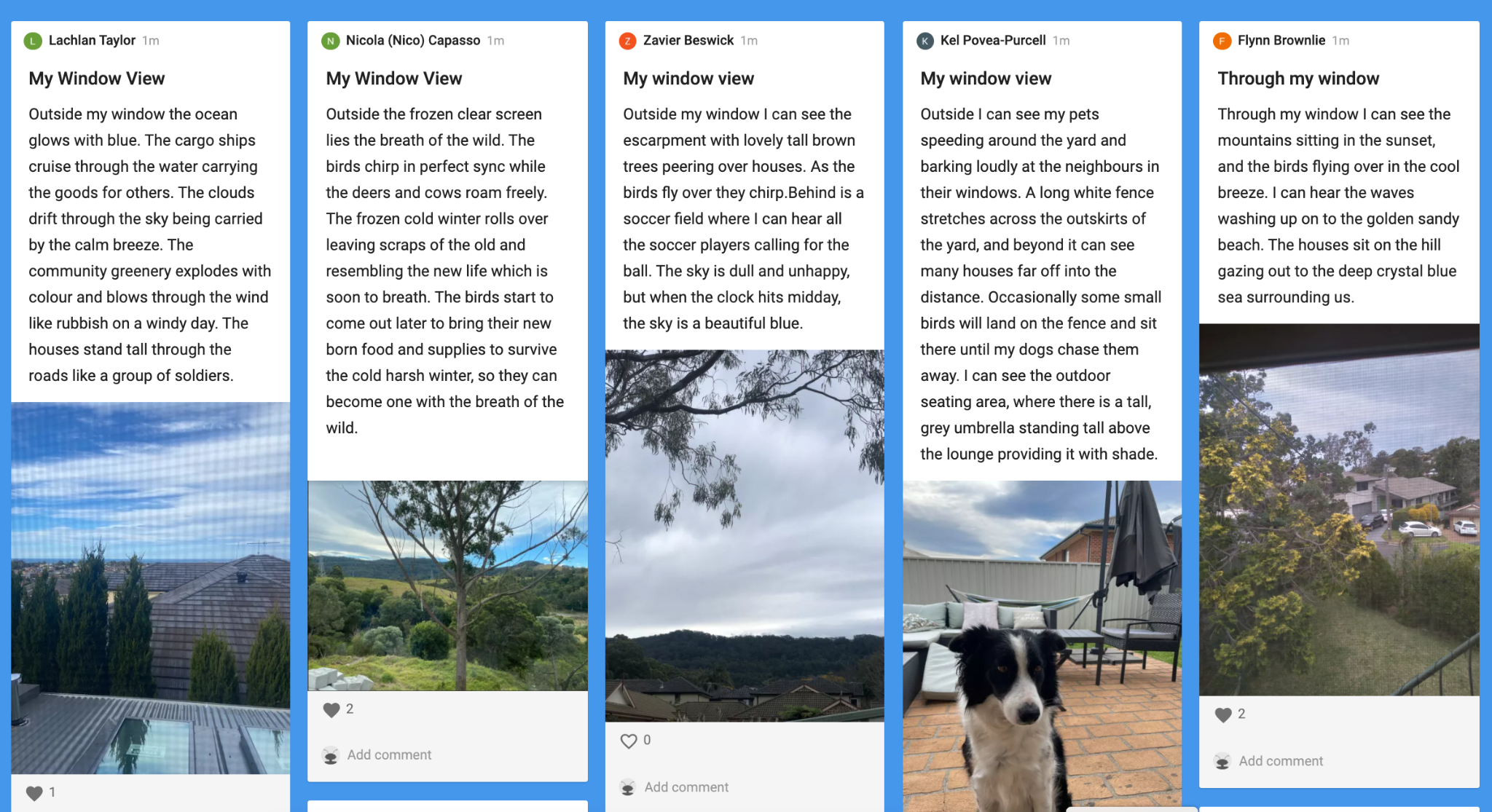 Ms Gazzola’s Year 7 students were challenged to practise their ‘showing not telling’ skills by choosing something to describe to their peers without naming the object. Here are some of the amazing descriptions they developed:

I viciously flicked my wrist back and forth, forcing the small but piercing loud ringing noise to occur. The intricate details of the handle and the cultured surface told a simple but blindingly, shiny history of which binds the swaying creator of the sounds. Liam Hall (describing a bell)

Much like a mountain, yet so violent; always causing destruction. With a burst, blood came rushing out of the surface. Xavier Stackhouse (describing a volcano)

I gazed at its glistening, rubbery hide, from afar, as it floated and bobbed in the distant water. It was the killer of the seas, and the slow agoniser of the land. This horror of mankind never broke down and was feared amongst the weak. But still… it wasn’t even living. Max Blacklock (describing plastic)

It was bright and dull. It was pure and perfect. It had red, yellow, green and also purple but most importantly it was mine. I made the picture perfect and that’s its beauty. Majd Abdullatif (describing an artwork)

Ms Gazzola’s Year 8 students were ordered away from their screens to go and ‘find’ some poetry. The rules were that they had to visit at least three different locations in their house and they could only use words that they found.

As a cold breeze freezes the sensitive Lebron James.

And this is the poem composed by Kobe O’Brien, Dante Lamont, Keanu Pollard, Max Wiaczek, Blayse Tolson and Ashton Luck:

These challenging times have inspired us to consider new ways of educating our students and facilitating meaning and engaging learning experiences. One such experience is the participation of Year 7 and 8 students in the Littlescribe Mini Writing Festival. Over the coming weeks, students will participate in a range of writing workshops delivered by well known authors such as Andrew Daddo, Jackie French and Kirli Saunders who will take students through activities to develop aspects of their writing. These activities will be brought together in a book that will be published and that we hope will bring the boys a great deal of pride.

“Reading gives us someplace to go when we have to stay where we are.”

Never have these words been more relevant than now. The current restrictions on our lives have presented us all with a valuable opportunity to reinvigorate our relationship with reading. It is likely we have more time on our hands and much more motivation to step away from screens whenever possible. Most English teachers are continuing to begin lessons with ten minutes of reading and Year 9 is currently completing a novel study. The boys may be reading Unwind, The Outsiders or To Kill A Mockingbird.  Please speak to the boys about what they are reading and encourage them to read often and widely. I invite them to reach out to their teachers (not only their English teachers!) if they need some recommendations.

The above question is often posed to English teachers by students (and sometimes parents) throughout the course of the high school years. Shakespeare was a genius who revolutionised theatre and English literature and his impact on Western Culture cannot be overstated. In order to help students understand why we study Shakespeare, some Year 10 students were challenged to find their own examples of figures who have had a significant and lasting impact on the culture or subculture to which they belong and therefore, uncover the parallels between Shakespeare and their chosen figures. Here are some of our favourites:

Marshall Bruce Mathers, also known as Eminem, is one of the biggest rappers in this day and age. He dropped out of school in Year 9 and worked on his music, as well as many part time jobs. In 1999 he released an LP, The Slim Shady, which blew up, to this day having over 681,853,935 plays on Spotify and 557 million views on Youtube. This song went on to win him two Grammies and four MTV Video Music Awards. Eminem has a very different style with his rap, telling the story of his life and taking many shots at other rappers in his songs. He broke the world record with his song ‘Rap God’ when rapping 97 words in 15 seconds; he then smashed that record last year with his collaboration with Juice Wrld in his song ‘Godzilla’ when he recorded 225 words in 30 seconds. This still stands as the fastest rapper to ever live with his unbelievable lyrical library. He still makes music to this day, recording over 41 million monthly listeners on Spotify. His rap life has been going for 22 years and he is still extremely popular. He is likely to retire soon as he does have a daughter whom he has said he would like to spend more time with. Eminem is like the Shakespeare of this generation as he was like no one else and is commonly referred to as the best rapper to live. This is related to Shakespeare as he is known as the best poet/playwright. Joshua Gowers

SOPHIE changed the face of hyper-pop. SOPHIE, a trans record producer, singer, songwriter, and DJ pushed the boundaries and changed the hyperpop scene forever. From her work on Charli XCX’s iconic EP ‘Vroom Vroom’ to her own 2018 album appropriately titled the ‘Oil Of Every Pearl’s Un Insides’ SOPHIE bends the idea of what music is and what it can be. The ideas and practices she intertwined into her music and her producing style has brought this underground subgenre into the mainstream media, having major influences on the most popular album releases in the past 5 years, like Billie Eilish’s 2019 debut When We All Fall Asleep Where Do We Go and Lady Gaga’s 2020 release Chromatica. SOPHIE’s producing practices and ideas will live on forever within the hyperop genre and her imprint in the space  will last the test of time. Henry Hofman

Lionel Messi and Cristiano Ronaldo are professional footballers who changed the face of football with their talent and fame. Ronaldo and Messi have made us reassess the definition of what a great player is and what a great player does like how Shakespeare changed the world of poetry with his talent.  They have set an example for all young players in the world. This rivalry has caused the world of football to be obsessed with who is the better player or GOAT (greatest of all time). A way Ronaldo has done this may be how he has scored 783 goals in his career which is the most goals scored in a player’s career in the history of football and for Messi, he has scored the most goals in a single calendar year ever. Not to mention they both have won 5 Ballon d’ors which is an award to represent the best player in the world. These achievements have changed the way people look at football and it’s the first thing you think about when you think of the sport. Most importantly this rivalry and talent has given people in this world believe that they can make it and do anything they want because if you can get where you are from where they came from you can make it from anywhere. Shakespeare changed the world with his invention of words and talent of poetry, these two have changed the world with their invention of skills and tricks on the field and by their talent of the sport.  James Ciot