The highlight of the week was our resident performance poet, Luka Lesson, who held poetry workshops for students from Years 8-12. Luka discussed the value of poetry as a powerful and creative way to express thoughts and ideas. He emphasised the importance of being ‘brave’ and ‘vulnerable’ in writing, and allowing emotions to be exposed. Luka walked students through a series of prompts that allowed them to craft their own poems before sharing some of their words with their peers. Many of our boys were surprised at their ability to produce a vivid metaphor.

The workshops were followed by an evening of Poetry and Pinot where guests were entertained by the poetry performances of Luka Lesson, before enjoying a poetry slam. Twelve students showed great creativity and bravery by performing their own poems which were judged by Luka Lesson. The variety of topics, strength of imagery and confidence displayed by these young poets was wonderful. Congratulations to Zane Al Salih (Year 10) first prize of $300, Marc Todoroski (Year 9) second prize of $200 and Declan West (Year 12) third prize of $100. Luka spoke highly of all our poets, and was particularly impressed by the courage of these young men in sharing and performing their writing in a public setting.

During the week, many English classes experimented with various activities that focused on building creativity and vocabulary. Students were challenged to create poems based on the spines of novels, the colours and names of paint swatches, and words inscribed on the staircases.

The library was also a hub of activity with scavenger hunts, guessing competitions and a Write-a-Book in a Day competition. Here, groups of students were provided with various scenarios, words and characters which they had to include in their story. The day began at 8am and students worked until 8pm drafting, writing and editing their 3000 word stories.

Finally, two sets of stairs in C-Block – where the English classrooms are located – have been colourfully furnished with various literature quotes ranging from Shakespeare to classic texts and contemporary Australian novels. These quotes complement the book spines that were placed on the stairs earlier this year.

The English Faculty would again like to thank the Parents and Friends Association for their generous support of the festival. For many students, the opportunity to participate in the poetry workshops hosted by Luka Lesson, and to see first-hand, the power of words to raise issues and expression was invaluable. 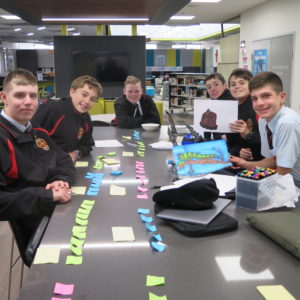